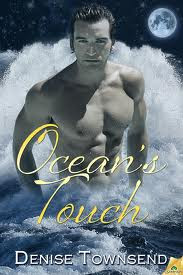 A lonely widow and a handsome artist have a chance for happiness ... with the help of a sexy selkie, that is.
After the death of Meredith's husband many years before, she allowed his legacy to take over her life. A shell of a woman, she finds little joy in her day-to-day tasks. Drawn to her pain, the empathic selkie Dylan knows she's ready to live and love again, and he knows that he's just the man for the job.
As Dylan draws Meredith out of her shell, he realises that to truly free her, he needs to help her accept her budding love for Alexander, an artist who challenges Meredith on every level: intellectually, emotionally and sexually. To achieve a true happy ending, Dylan must help his chosen humans break down their emotional barriers in order to grab the happiness they so deserve.
Warning: This book features a lonely widow, a hot artist waiting in the wings, and the sexy selkie who brings them together ... in every possible way.

Knowing this was written by Nicole Peeler in her alter ego of Denise Townsend, I knew I'd be getting sexy stuff but man, oh man ... even I wasn't expecting this! You want hot, passionate, sex where nothing is held back? Read this book right now!

Dylan is a super sexy selkie who is drawn to women in need of a change, so he's drawn to Meredith. In her widowed life of keeping her husband's estate and charity work running, Meredith has never lived for herself. Even when she first married her husband at 21, she was never really herself, she was what he wanted her to bed. So Dylan is exactly what she needs, in every sense. He opens her up personally and sexually, and lets her see her true self, as well as her true feelings for Alexander.

The storyline is mostly comprised of sex, sex and hot hot sex. But, you know, if I'm forced to read that for the sake of writing reviews, I'll buckle down and force myself to read it. (Yeah, right!) One small irk of mine is an entirely personal thing about Scottish characters. They never speak right to me, I get that they have to come across as Scottish but a lot of the things they say never seem to fit in with the rest of what they're saying. Obviously I read the dialogue in a Scottish accent and a non-Scot can never find the right balance between Scots slang and normal English. But happily, this is never enough to put me off reading a story unless the story is also poor. And believe me, THIS is not poor!

Get it read now, you won't be sorry.