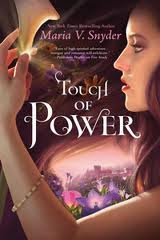 Laying hands upon the injured and dying, Avry of Kazan absorbs their wounds and diseases into herself. But rather than being honored for her skills, she is hunted. Healers like Avry are accused of spreading the plague that has decimated the Fifteen Realms, leaving the survivors in a state of chaos.

Stressed and tired from hiding, Avry is abducted by a band of rogues who, shockingly, value her gift above the golden bounty offered for her capture. Their leader, an enigmatic captor-protector with powers of his own, is unequivocal in his demands: Avry must heal a plague-stricken prince — leader of a campaign against her people. As they traverse the daunting Nine Mountains, beset by mercenaries and magical dangers, Avry must decide who is worth healing and what is worth dying for. Because the price of peace may well be her life....

I love Maria's Study series and her Glass series, if this book is anything to go by, I'm also going to love the Healer series. I haven't read any of the Glass or Study books in a while so I don't know whether this new series is set in the same world, although it does seem like the same world or at least a similar one.

Avry is just as intriguing a lead as Yelena (Study) and Opal (Glass) and promises to keep the reader enthralled for as long as Maria keeps the Healer series going. Maria seems to like trilogies so it wouldn't surprise me if this was one. And once again Maria manages to keep us hooked with a not-there romance, we just need the promise of one to be happy. I think I may be slightly in love with Kerrick, and he does remind me slightly of Valek (Study).

Definitely a must-read for all Maria V. Snyder fans, and if you've never read anything by Maria this would be a great starting point. Although I also recommend any of her books.