On A Dark Wing by Jordan Dane 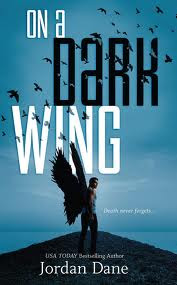 Five years ago, Abbey Chandler cheated Death. She survived a horrific car accident, but her "lucky" break came at the expense of her mother's life and changed everything. After she crossed paths with Death - by taking the hand of an ethereal boy made of clouds and sky - she would never be normal again.

Now she’s the target of Death's ravens and an innocent boy's life is on the line. When Nate Holden - Abbey’s secret crush - starts to climb Alaska's Denali, the Angel of Death stalks him because of her.

And Abbey finds out the hard way that Death never forgets.

Quite an interesting read although I have to say, I was a bit ..... disturbed? ..... by Abbey's obsession with Nate, it bordered on creepy and stalker-ish. It was more than just a teenage crush, or maybe it was just a teenage crush but, since Nate was mentioned or fantasised about every other paragraph, my mind pushed it into obsession.

But the story was good other than that. I liked the take on death, although I didn't see Death as a young boy, I'm kind of hoping that Abbey seen Death as a teenage boy 'cos she's a teenager and that a person would see what they would most relate too. I liked how the story was told from a few different POVs, especially the parts with Abbey and Nate, since it let you see what was happening on both sides of the stories.

Definitely worth a read and a nice change from all the current YA books.


Book Depository: On A Dark Wing
Amazon UK: On a Dark Wing