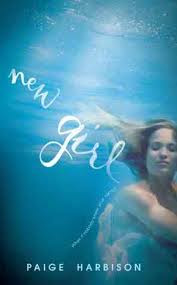 Ever since I arrived at exclusive, prestigious Manderly Academy, that's who I am. New girl. Unknown. But not unnoticed — because of her.

Becca Normandy — that’s the name on everyone's lips. The girl whose picture I see everywhere. The girl I can’t compare to. I mean, her going missing is the only reason a spot opened up for me at the academy.
And everyone stares at me like it's my fault.

Except for Max Holloway — the boy whose name shouldn't be spoken. At least, not by me. Everyone thinks of him as Becca's boyfriend ... but she's gone, and here I am, replacing her. I wish it were that easy. Sometimes, when I think of Max, I can imagine how Becca's life was so much better than mine could ever be.

And maybe she's still out there, waiting to take it back.

Know what bugs me about YA books? The blurb never really tells you all that much about the story. This one's not too bad but I've picked some up in the shop before that have had, like, one sentence as the blurb. Like I said, this one's not as bad as that but it still follows that YA rule of thumb where you don't give too much away.

So as far as I can now remember, we don't actually find out who "I" is until the very end of the book. I can't remember reading her name until either the last or 2nd to last page so I'm not going to write it here. I shall call her "I"!

"I" lives in Florida and her parents have managed to get her a place in the prestigious Manderly Academy, a place "I" so badly wanted to go to since she read Harry Potter that her parents have been trying to get her into it since she was 13. "I" doesn't really want to go anymore but she does because she doesn't want to hurt her parents. She doesn't realise she's "replacing" Becca Normandy, the QUEEN of Manderly. She has Becca's old room and room mate - this does not please said room mate. Everyone seems to hate her since she's Becca's "replacement", and it also doesn't help that she has feelings for Becca's ex. Cue High School drama multiplied by 10!

Now I'll admit, it's been a while since I was in Secondary School (it's what we call high school over here) and I never exactly hung out with the "cool" kids but if this book is anything to go by? I'm glad I didn't! These kids are MEAN! They all seem obsessed about Becca and her room mate in particular is convinced she's coming back and constantly tells "I" not to get comfortable. What we find out through Becca's POV chapters is that everything isn't as happy-pretty as people thought. Becca's a bitch with a capital B! But in the classic high school cliche, she has everyone wrapped round her finger.

An excellent read by the author of Here Lies Bridget, Paige Harbison proves to be a talented author who I think will prove popular in the YA market.