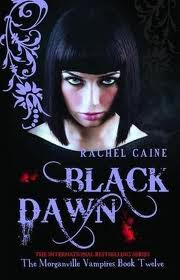 When a tide of ferocious draug, the vampire's deadliest enemy, floods Morganville, its eclectic mix of residents must fight to save their town from devastation.

Chaos has taken over the quiet college town of Morganville as the threat of the draug rapidly spreads with the help of the city's water system. Whilst most of the locals have already fled, student Claire Danvers and her friends Shane, Eve and Michael choose to stay and fight.

Things take a turn for the worse when vampire Amelie, the town's founder, is infected by the master draug's bite. Unless Claire and her friends can find an antidote to save Amelie and overcome the draug, Morganville's future looks bleak ...

So anyone who has read any of my previous Morganville reviews will know I love this series and Rachel Caine. I love anything that woman writes and refuse to believe there is anything bad to say about her books. You might think this would make writing the review easier but it's a lot harder since I feel like I just gush over her and her works.

For any who don't know, Morganville is a town in Texas that is run by vampires. Everyone, except for the Uni students, know about the vampires and live by certain rules etc. to keep themselves alive. Claire Danvers is one of those students but she finds out about the hidden background of Morganville and eventually starts working for the founder, Amelie. Throughout the books Claire deals with a lot: bullying, moving into a house with strangers, finding out vampires exist, learning how to live in Morganville, falling in love, almost dying, actually dying, saving the town, saving herself and her friends as well as other little trivial things. Black Dawn is the most recent in the series and we find out more about the even-more-baddy-than-vampire draug that were introduced in Last Breath.

So, like I said above, there are no bad things to say about Black Dawn. All Morganville fans will want to read this, it brings up some interesting ideas for future books and any non Morganville fans, I highly recommend you start the series with Glass Houses

and work through it from there. For UKers there's a gorgeous Morganville omnibus