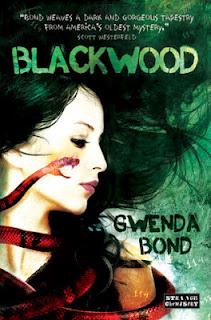 On Roanoke Island, the legend of the 114 people who mysteriously vanished from the Lost Colony hundreds of years ago is just an outdoor drama for the tourists, a story people tell. But when the island faces the sudden disappearance of 114 people now, an unlikely pair of 17-year-olds may be the only hope of bringing them back.

Miranda, a misfit girl from the island’s most infamous family, and Phillips, an exiled teen criminal who hears the voices of the dead, must dodge everyone from federal agents to long-dead alchemists as they work to uncover the secrets of the new Lost Colony. The one thing they can’t dodge is each other.

So apparently the whole missing people storyline in this book is a real thing? I never knew that, I've never heard of Roanoke Island before I started this book so forgive me for not knowing the backing behind this one.

People go missing from Roanoke, not just a couple of people though, 114 go missing all on the same night. Which is a bit weird, let's admit it. Philips left the island by choice years before but his dad calls him back 'cos he thinks his "gift" can help with this case. Miranda's family has always been ostracised on the small island but she finds out they're involved in the disappearance somehow. So of course Philips and Miranda work together and end up falling in love.

Now there's a pretty big thing that happens right at the beginning of the book but it's not mentioned in the blurb so I don't want to mention it and spoil the story, but not mentioning it prevents me from discussing more of the story so .... yeah, sorry.

The story itself develops pretty fast, as do most YAs, due to the length but what this story doesn't manage that a lot of YAs do is a believable love story. It goes way too quickly in my opinion, but then I'm also almost 30 so what do I know about young people these days. I know a lot of young kids think their in love when they're only about 14 and can get into "relationships" (or at least what they think are relationships) from a young age so maybe this fast moving love story isn't as unbelievable to some as it is to me. Another little annoyance is the author's need to put all these little geek references in ~ just seems overkill and I have to say, if I knew Miranda in real life? I'd teach her some new swear words rather than have her say frak for every little thing, you'd think she'd know other words since she watches a lot of TV.

So, in short, an interesting storyline (that some have heard of before the book ~ possibly just Americans or history buffs?) with a mix of Alchemy in there too. A nice quick read.