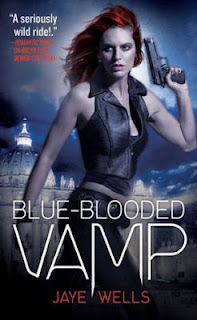 Sabina Kane is on the hunt. Her prey: Cain, the father of the vampire race and the one who murdered her family and her friends. Unfortunately, Cain is hunting Sabina, too.

The one man who holds the key to defeating Cain is, of course, Abel. A mage with secrets to spare and, hopefully, the power to match it. Unfortunately, for Sabina, he's in Rome and may not want to be found.

Sabina sets out for Italy with her friends, Giguhl and Adam Lazarus, to track down the only man who can get her the revenge she hungers for. But will he help her or oppose her? And just who is Abel, really? Worst of all, when Sabina figures out the goddess Lilith has a plan for her - she realises this trip is getting deadlier by the minute. As they say: when in Rome - SURVIVE.

Heads up here but this review WILL contain spoilers. This is the last book in this brilliant series and I am not holding back! So if you haven't read it, here's a quick review for you : GO READ IT! IT'S AMAZING! OK, so you can go buy it now, right? And I'll carry on with my spoiler-y review? Good, good. Don't scroll down from here unless you want the spoilers.


And just in case you didn't heed my warning, I've hidden the spoiler-y bit.  Highlight if you want to read it.

So this is indeed an EPIC conclusion to the Sabina Kane series. After Cain killed Maisie in Silver Tongued Devil, Sabina wants revenge. Trouble is no-one can kill Cain without repercussions except for the Chosen, Maisie has seen Sabina as the Chosen but Sabina has always fought with it, now it's time for her to live up to that vision.
Sabina, Adam and Giguhl head off to Rome to find Abel as he's the only person that can help them. Trouble is, Asclepius has asked for payment and he wants Sabina to kill a vampire called Nyx since he's heard she's in Italy as well. So off they head to Italy, with Erron Zorn since he's the contact for Abel. Big shocker when they finally meet Abel and he's (are you ready to read this?) Sabina's father. But she has to deal with that to kill Cain, trouble is he doesn't believe she is the Chosen, he thinks it was Maisie and that with her death, all is lost. So they have some tests to see if she has what it takes to be the Chosen, oh and Sabina finds out that the vamp she's supposed to kill is part of her dad's team so she can't kill her but this pisses Asclepius off. The group must travel to Irkalla to find Lilith and Asclepius sets Cain on their tail. Tests await and Sabina loses her mage powers, her immortality and her vamp-ness only to find out she's not the Chosen after all, the Chosen is her and Maisie together. So they join up and kick his ass and then Sabina has to lead the Dark Races on earth while Maisie leads them in Irkalla so Lilith can have some time off. Oh yeah, and Giguhl gets married!

So that's my retelling (in a crap way) of the story. I loved loved loved this book, even though it brings one of my favourite series to an end *sad face*, it does it in a spectacular way.

But that's more awesomes than bittersweets so I'm happy to leave it at that. This book is a definite must read for anyone who has started this series. If you haven't read this series then go start with Red-Headed Stepchild

and work your way through, you won't be sorry.