No, I'm not condoning war, I'm talking about book covers. It always amazes me how different some book covers can be in different countries, and then for other books the cover can be the same.

Personally, the majority of the time I prefer UK covers to US or Canadian. This is purely because most US covers I see have half naked men or women on them and that just does not interest me, what it says to me is that sex sells in America.

I also prefer a cover that has some sort of clue to the story inside and, if it has a cover model, I like the cover model to actually look like the character(s). I never get a book that has a brunette on the cover and the main character is described as blonde, is the cover model supposed to be some obscure bit character? Or could the publishers not be arsed finding a new cover so maybe just recycle an old one? To be fair, I don't see this happen all that often but I have seen it happen.

Today I thought I'd compare the covers for one of my favourite series from the UK, US and Canada.


The Otherworld Series by Kelley Armstrong 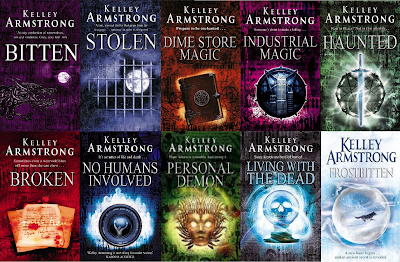 The image above is the original UK covers. Of course these covers hold a very special place in my heart since these are the covers I have. I love them and each cover has an image that has something to do with the story. You'll notice the covers stop at Frostbitten, it was at Frostbitten that the publishers decided to give the covers a revamp so from Waking the Witch onward, it's all the new covers. 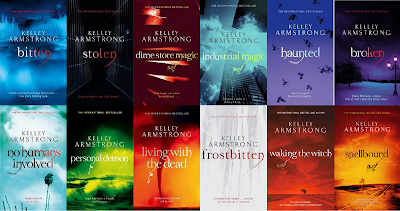 These are the new UK covers, the whole series has been re-released with the new covers. And, I have to admit, that even though I hated the fact that the covers got changed during the series (which I hate cause it messes up my bookcases), I really love these new covers. So much so that I am planning on re-buying the whole series so I have both sets of covers.

These are the US covers - I believe. I used both Kelley's website and Goodreads as reference for this post and it seems to me that perhaps the US are also getting a re-release to match the new style covers? Bitten and Stolen both have a cover that seems to fit in with Waking the Witch and Spell Bound and I couldn't find a similar cover for the rest of the books so I'm assuming that they're still being released? Either that or I just couldn't find the covers anywhere. Personally, I prefer the new covers to the old ones, I think it's the whole naked/half naked cover model thing. A lot of the old covers make absolutely no sense to me story wise.

And these are the new Canadian covers, I couldn't find any old Canadian covers so I'm assuming they just had the US covers before. Again, I'm not sure since I don't live there (yet, haha). I really like these covers, they're very eye catching and I love them even though they don't have the image to story link that I like. 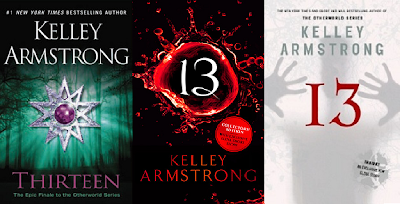 And these are all the covers for 13 (or Thirteen if you're American). I know Kelley explained on the difference in title but I can't remember the reason behind it. Out of the 3 13 covers, I think the Canadian one has to be my favourite with the UK as a close second.


So yeah, this was just a post about the covers. The different country covers always intrigue me and I have several series that I will go out of my way to buy the US cover for but most of my books are UK covers.

I am thinking on making this a semi-regular series on my blog, using some of my favourite series to compare the cover differences. Depends on how well this one does, finding and sticking all those images together took a loooong time!
Posted by Julie-Anne at 21:10

Labels: cover vs cover, kelley armstrong, otherworld, uk vs us vs canadian