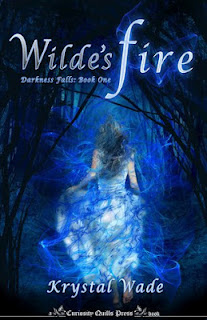 "There is no pain in this death, only peace, knowing I am going to die with the one I love the most."—Katriona Wilde.

Katriona Wilde has never wondered what it would feel like to have everything she's ever known and loved ripped away, but she is about to find out.

When she inadvertently leads her sister and best friend through a portal into a world she's dreamed of for six years, she finds herself faced with more than just the frightening creatures in front of her. Kate's forced to accept a new truth: her entire life has been a lie, and those closest to her have betrayed her.

What's worse, she has no control over her new future, and it's full of magic and horrors from which nightmares are made.
Will Kate discover and learn to control who she really is in time to save the ones she loves, or will all be lost?

Yet another reason why I love Netgalley, I get to find new authors that I may never have found, or heard of, otherwise. Wade writes a very believable world and extremely likeable characters (even the dude you're eventually supposed to not like).

Kate has been living a lie only she didn't know it. She's been dreaming of a hunk for 6 years now, every time she dreams of him he dies in horrific ways. Little did she know that said hunk actually existed in another world, a world she belongs in and a world she's destined to save from darkness.

I really liked the scenes between Kate and Arland, they start off as you'd expect and progress at a nice pace. It's not the overdone instalove relationship that a lot of books have so it's believable. Kate does seem to accept the whole different world/she's the saviour/hunky dream guy exists thing very quickly which I find a bit hard to believe, I'd expect someone to be pretty freaked out by that. The one big letdown in this book is the ending, it's a HUGE downer and a bit anti-climactic. But I know it's leading onto a sequel so I can (sort of) understand it and I'll live with it until the 2nd book is out. Although I have come to realise that I do, apparently, like cliffhangers or, at least, action packed endings.