Love and Other Indoor Sports by Seleste deLaney 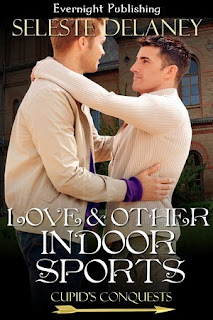 Cupid still has a lot to learn, and this time he's heading to college to do it.

Griffin and Colby were shoved together by fate during a fraternity hazing game of spin the bottle but, in a world deserted by Cupid, fear and uncertainty pushed them apart. Now, twelve years later, they're getting a second chance with each other. A woman in Colby's life, however, doesn't like what she sees as competition for his affections, and she's willing to ruin both men if they don't bow to her demands. After all this time, are they willing to risk everything for a chance at happiness, or are they destined to lose each other again?

Cupid won't give up easily though. He has one last game for them to play and, this time, it's winner take all.

Griff and Colby had to kiss each other for one minute while being hazed for a fraternity at school. For Colby, it made him think he couldn't possibly hide his sexuality since he'd always had a crush on Griff. For Griff, it made him feel something he's never felt before and made him realise he wanted Colby. They never acted on those feelings as they both thought each other was straight, until they met up 12 years later at a reunion ... and man, did the sparks fly. Of course they still think each other is straight but then they finally click and then they "click" (wink, wink).

The sex was brief but hot and the story was fun and a bit Single White Female feeling. Stalker, crazy student that tries to make life difficult 'cos she wants to sleep with her gay coach ... bitch needs to get a clue!

Still liking this series and I think the fact that it's a different author for each one keeps it fresh. There's less chance of repetition with more authors, although this is deLaney's 2nd book in the series and I'm sure since she's the founder of the series, she'll probably have more. I like that idea.