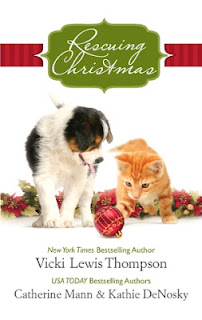 For three couples, this is the season...to give, to heal, to love.

All Ben Rhodes wants for Christmas is to be left alone. And yet, in a fit of Christmas-cheer-induced insanity, he agrees to help beautiful shelter director Tansy Dexter find homes for all her rambunctious animals. Little does he know that the one truly in need of a loving home this season ... is him.

Home for Christmas by Catherine Mann

Shelby Conrad has had more than her fair share of silent nights. But even though her husband, Tech Sergeant
Alex Conrad, is coming home in time for Christmas, Shelby isn't sure he's in time to save their marriage. Can a road trip to deliver three shelter dogs to their new homes teach the couple that the most precious gift of all is hope?

A Puppy for Will by Kathie DeNosky

Will Parker hasn't exactly had all his hopes and dreams met, but work has filled the gaps in his life. Or so he thinks ... until an energetic and large Saint Bernard foster puppy and Will's cute neighbor Macie Fairbanks introduce him to the best thing about Christmas and life — unconditional love.

Again, not the type of book I'd go for but the animals sold it to me. All three stories feature different people that are all linked to the Haven, a shelter in Tacoma - which is apparently a real place, don't ask me why but it sounds like a made up name.

Holiday Haven
Ben films Tansy for the news and likes what he sees so he agrees to go out to the shelter and take pictures for the christmas appeal. Spending all that time in close quarters gets the feelings ramped up until they finally sleep together then Tansy ruins it by getting pushy about pet adoption but when the office cat gets rushed to the vets, Ben goes to comfort Tansy and they finally admit their feelings for one another.

Some things I disliked were Ben's constant inner monologue about not wanting to go into is history and Tansy's inner monologue of Ben only needs to open up a little and he'll be happy to take on an animal. I felt the author was really too pushy with the Ben-has-a-bad-history storyline and I also hated how pushy Tansy was for someone who runs an adoption centre, she of all people should know you don't push a pet onto someone if they don't want it so this particular thing bugged me.

Home for Christmas
Shelby and Alex are getting divorced but they've agreed to spend christmas together and Shelby plans on them having a heartfelt chat on a road trip to deliver 3 shelter dogs. Two of the dogs get rehomed but one gets injured and Shelby feels guilty about it, as Alex is comforting her they end up having sex but then the next day they don't discuss it. At Shelby's dad's house Alex realises he doesn't want to divorce Shelby and that he'll do anything to keep her.

I enjoyed the storyline in this one, I think it's 'cos it didn't involve "love" at first sight - which I strongly don't believe in so stories that feature it aren't really a seller to me. I also like the main characters, again I think it was 'cos it was a longer relationship so there was no pathetic "woe-is-me" inner dialogue. Definitely my favourite of the three.

A Puppy for Will
Will agrees to foster a puppy over christmas but when the pup introduces him to his neighbour, he realises he wants her. Macie turns out to be Will's "arch nemesis" who's been giving him bad reviews about his computer programmes, when he finds this out he feels betrayed but his time away from her afterwards makes him realise he loves her and she realises she loves him.

I wasn't too keen on the persistent lines of "I've had a bad relationship" - from both of them. They were both so determined they would never have another relationship yet after only knowing each other a week they decide their in "love" and even get engaged? To me that is highly unbelievable and it was a downfall for the story. It also bugged me how many times Will said "honey", seriously - it was constant! I think this was my least favourite story.