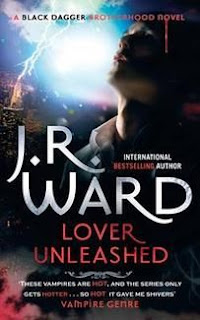 Payne, twin sister of Vishous, is cut from the same, dark, seductive cloth as her vampire brother. Imprisoned for eons by their mother, the Scribe Virgin, she finally frees herself - only to face a devastating injury.

Manuel Manello, MD, is drafted by the Brotherhood to save her as only he can - but when the human surgeon and the vampire warrior meet, their two worlds collide in the face of their undeniable passion. With so much working against them, can love prove stronger than the birthright and the biology that separate them?

Payne's back is broken and Doc Jane does not the skill to fix it so she goes to her old colleague, Doc Manny. Trouble is that Manny thinks Jane died a year ago, so she pops up and reveals that she faked her death and needs his help with Payne. Manny meets sees Payne and is entranced by her, he operates on her back but she still can't walk, apparently only he can help her walk by bringing on an orgasm so strong that she GLOWS! And hey, guess what? She can walk again (that's some awesome O-powers that doc has!). Wrath agrees to let them be together but Manny calls it off based on the fact that Payne's orgasm-glow has healed him and made him look younger (!). He also finds out he just happens to be a half-breed like Butch.

So where to start with this one. First off, I bought this book about a year ago and I just never got round to reading it. The series just doesn't do it for me anymore, not saying I won't continue with it but I'm not super excited about new books being released and I probably won't buy them as soon as they come out and I'll probably start reading them with a feeling of "What's going to annoy me in this one?"

Let's list the annoyances I have: Manny talks about going into the operating theatre as the Vet fixes his horses fractured (with fragments) leg, according to him this only took an hour .... no, that's completely wrong. When Manny scrubs up for surgery on Payne's back, he shakes his hands dry ... again no, that's completely wrong - you do NOT shake your hand dry after scrubbing up, defeats the purpose of scrubbing up. There are constant recurrences of questions being asked with no ? at the end - it may be that it was missed in editing or it may be that Ward meant it to be that way, either way it bugged the crap out of me. And lastly, Manny is a half breed? Butch's brother apparently - is EVERY human male going to turn out to be a half breed just to make them easier to assimilate into the Brotherhood's lifestyle? If so, that will be extremely boring and probably annoying.

So yeah. I didn't love it, I didn't hate it. I WILL continue with the series but with a bit or trepidation.