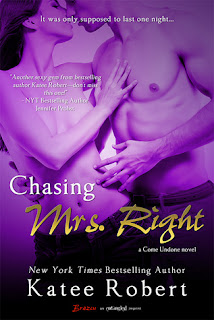 It was only supposed to last one night ...

Roxanne Stokes doesn't believe in love. She does, however, believe in the sexy-as-sin stranger who literally knocks her off her feet in front of a nightclub. The chemistry sparking between them takes her breath away, and she'll do anything to ease the pain in his eyes ... until she realises the handsome stranger is her best friend's older brother who's just come home from war.

Ian Walser had no idea the gorgeous woman he slept with the night of his homecoming party was his little sister's best friend — or that she'd be gone before morning. Roxanne's touch soothes him in a way nothing else can, and he's not ready to walk away from that yet. Not when spending time with her gave Ian a glimpse of everything he's ever wanted.

When his sister unwittingly pushes them together, he sees his chance. But convincing a woman who doesn't believe in love that she's his Mrs. Right might be harder than any mission Ian's undertaken. Good thing this soldier likes a challenge ...

On her way to Elle's brother's homecoming party, Roxanne is knocked off her feet (literally) by a gorgeous stranger ... only he's not a stranger, he's Elle's brother - the very guy who's party she was supposed to be attending. Instead they share awesome orgasms and Roxanne splits - only to be confronted by Ian the next day. They can't deny the attraction between them but both have serious issues.

I kind of related to both Roxanne and Ian. Ian hates being in crowds (as do I, although to be fair he has a better reason than me) and Roxanne has serious problems with the L-word (not lesbian or lesbians) and I feel the same way (again, she has different reasoning from me on this) but because of these two, I could relate to and understand both.

Ian also has a BIG problem with Gabe marrying his sister - but this is only 'cos he thinks Gabe is a tool and will break his sister's heart. But of course, this does cause some friction in family circumstances.

I can't wait to read Nathan's story - which I believe is next.