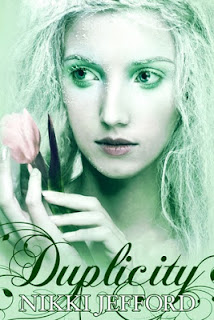 If Graylee Perez thought sharing a body with her twin sister was bad, dealing with a duplicate of herself is two times worse. Gray the second doesn't seem to get that Lee's boyfriend, Raj McKenna, is off limits. Then there's the problem of Adrian Montez. He expects one of the Grays to be his.

Nearly a year later, the council is onto them for past misdeeds; Lee, along with the rest of the coven, has lost control of her powers; and Gray is being stalked by what looks like the Grim Reaper.

If they work together, they may stand a chance of setting things right and making it out alive.

Lee is anxious as it's coming up to the anniversary of her death, she's looking forward to Valentine's Day with Raj. Little does she know that in France Charlene is really Graylee - this Graylee thinks she's just been purged from Charlene's body. As if trying to deal with that isn't bad enough for everyone, all the witches & warlock's powers are going wonky, and there's Adrian Montez - who has shown up in town again.

This is the sequel to Entangled. This one wasn't as slow to start as the first, maybe 'cos stuff has already happened and we already have the back story so there's no need for the build up.

As much as he's the "bad guy", I like Adrian. He's so cocky - which isn't a thing I go for in guys but I enjoy it in Adrian. I found myself not liking the duplicate Gray, she was a bit whiny - I know, I know, she just realised she's missed months of her life and feels unwanted but still, there's such a thing as too whiny. Thankfully, she finishes up not too bad - which is good since she seems to be the main focus of the next book if the preview at the end is anything to go by.

Another thing that helps this story become better than the first is that this one has no Charlene in it ..... at all. It's great.