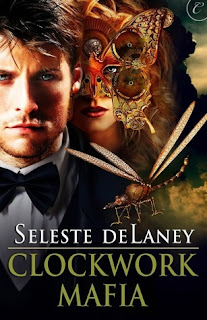 Inventor Henrietta Mason is retiring from airships and adventuring to return home to Philadelphia. Determined to erase all trails leading to her late father's duplicity, she dismantles his lab and removes all records of the Badlands gold. While in the city, she can't resist the lure of a charity gala but winds up regretting the whole experience. Well, everything except a heart-racing dance with a certain U.S. Marshal.

His career and vengeance on the line, Carson Alexander must prove a connection between Senator Mason and the mafia. He lucked out happening across Mason's strikingly beautiful daughter, only to have her slip through his fingers. On a desperate hunt to track her down, he never expects his search to take him into the brutal Badlands.

With a mechanically enhanced enforcer after them, only Carson knows the extent of the danger they face. He'll have to win over Henrietta's trust, and her heart, before it's too late ...

Henrietta wants nothing more than to be rid of reminders of her father's betrayals and no-good-ery (it's a word, I swear!) but while she's in Philadelphia finishing stuff up, she meets Carson and feels an attraction towards him ... and him to her. When he discovers who she is, Carson finds her just as she's leaving for the Badlands and stumbles into a mafia raid of the Dark Hawk. Following her to the Badlands, he helps her with her father's things and her mafia trouble and neither one of them can fight the attraction they feel (despite Henri trying to ignore it).

Readers of my blog know that I know Seleste and I like to troll her by telling her her books aren't long enough ... this one is no different - "Hey Sel, it's too short!"

Seriously though, I loved this book. It's weird how reading from another person's POV can change your perspective of another character. In Badlands, I liked Ever's straight to the point talk and no shit attitude - but in this from Henri's POV? I found I really disliked her, and vice versa, I'm pretty sure I disliked Henri in Badlands but I really liked her in this.

It's the whole thing of getting inside someone's head, I think. In Badlands, we were seeing Henri through Ever's eyes and she came across a bit stuck up and up herself. Whereas in this, you get to know that even though she's like that, she doesn't want to be like that and as much as she wants to be herself she feels she has to act the way society expects her to.

I'm glad to say that Carson changed her mind and her choices. Still love this world that Seleste has created and I can't wait to read more ...... there will be more, right?