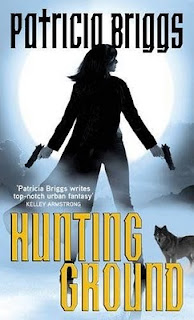 For hundreds of years, werewolves have kept their existence hidden from all but a select few humans. But, if the packs agree, the time for keeping secrets might be over.
Anna and Charles have been sent to the wolves' conclave in Seattle to keep the peace. But when Jean Chastel, the leader of the French werewolves, goes after Anna, Charles can't control himself. Chastel survives the vicious fight that ensues, but when he's discovered murdered that night, Charles is the prime suspect. And the penalty for murdering a fellow werewolf is death.
Now Anna has only days to clear her partner's name. She knows Charles is innocent, but if he didn't do it - who did?
More of Charles and Anna and even more relationship growing which I'm still loving. The thing that confused me though was that the actual storyline from the blurb doesn't happen until the book is nearly finished. For ages I thought the blurb was wrong and the story wasn't going to happen until the next book. Chastel is the typical bad guy, you love to hate him and are very pleased when he dies.
I think all women secretly want a guy like Charles who's willing to do anything to protect you and loves you unconditionally. There's a particularly nice scene where Charles shows he's willing to submit to Anna to help her overcome her fear of Alphas and deal with her wolf being able to do things that she can't do on her own.
Can't wait for more Charles and Anna.
Rating 5/5