On the Prowl anthology by various authors 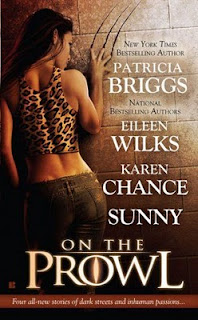 Alpha and Omega by Patricia Briggs
The werewolf Anna finds a new sense of self when the son of the werewolf king comes to town to quell unrest in the Chicago pack - and inspires a power in Anna that she's never felt before.
Unfortunately, I read this story after I read the first book in the Alpha and Omega series so I knew some of the story but it was still a great read. I really like Charles and Anna and enjoyed reading about how they met and how Charles' wolf reacts to Anna when he first meets her. A definite must read.
Rating 5/5

Inhuman by Eileen Wilks
Kai has a secret gift of sensing thoughts and desires. What she senses in her neighbour Nathan could be dangerous. Because he has a secret gift, too, and it's about to be let loose.
I liked Kai and Nathan and the short was fun and exciting. I went straight to Amazon and added the Lupi series to my wishlist. This short actually fits in the middle of the series. I'm really excited about reading more involving Kai and Nathan, their relationship was a great read and I can't wait to see it develop.
Rating 5/5

Buying Trouble by Karen Chance
In a New York auction house, a Lord of the Fey crosses paths with a fiery redhead mage named Claire. But in this strange underground society, the rarity up for sale is Claire herself.
I've read Karen Chance before so I knew I'd like the writing. I liked Claire and I liked Heidar. I would really enjoy reading more about them and the dragons, I liked Karen Chance's take on Dragons, making them more like weres so they have a human form as well.
Rating 4/5

Mona Lisa Betwining by Sunny
Among the children of the moon, Mona Lisa is of Mixed Blood - part Monere, part human, and destined to be alone. Then she meets a man who could be her salvation - or her downfall.
This started of well but very quickly went downhill. The writing was horrendous, the characters were not likable and the sex scenes were cringeworthy.
Rating 1/5


Book Depository: On The Prowl
Amazon UK: On the Prowl