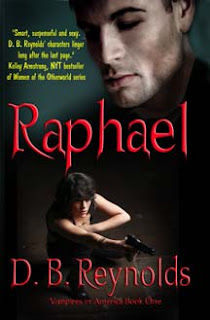 Malibu, California—home to rock-and-roll gods and movie stars, the beautiful, the rich . . . and vampires.

Powerful and charismatic, Raphael is a Vampire Lord, one of the few who hold the power of life and death over every vampire in existence. Thousands call him Master and have pledged absolute loyalty on their very lives. But when, in a brazen and deadly daylight attack, a gang of human killers kidnaps the one female vampire he’d give his life for, Raphael turns to a human investigator to find his enemies before it’s too late.

Cynthia Leighton is smart, tough and sexy, a private investigator and former cop who’s tired of spying on cheating spouses and digging out old bank accounts. When Raphael asks for her help in tracking down the kidnappers, Cyn’s happy to accept. But she soon realizes her greatest danger comes not from the humans, but from Raphael himself.

Battling Russian mobsters and treacherous vampires, and betrayed by those they trusted, Cyn and Raphael find themselves fighting for their lives while caught up in a passion of blood and violence that is destined to destroy them both.

Book one in the Vampires in America series. I wasn't too keen on Cyn as a lead character but I loved Raphael and I loved the story so I could put that in the back of my head.
The story was good and the characters are likeable. I especially like Duncan and I believe he has his own books coming so I'm looking forward to that.
DB Reynolds vampires are strong, powerful and gorgeous! I'd like them to actually fight more, the fight scenes are more a pushing of power between the vampires and I can't help but have a mental image of two vampires just standing there. I know that's probably not what DB Reynolds had in mind when she wrote the scenes but it's how my mind apparently wants to see them. I tried to fix that in later books and I'm slowly training my mind to see it better.

A definite must read for all vampire fans out there.
Rating 5/5