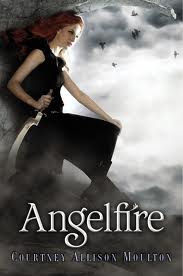 When ordinary seventeen-year-old Ellie starts seeing reapers - monstrous creatures who devour humans and send their souls to Hell - she finds herself on the front lines of a supernatural war between Angels and the Fallen, and faced with the possible destruction of her soul.

A mysterious boy named Will, who has been waiting sixty years for her return, reveals she is the reincarnation of an ancient warrior, the only one armed with angelfire, and capable of fighting the reapers. He is an immortal sworn to protect her in battle. Her soul has been reborn again and again over the centuries to fight the reapers, and he's been there for five hundred years to protect and fight alongside her. Now that Ellie's powers have been awakened, a powerful reaper called Bastian has come forward to challenge her. He has employed a fierce assassin to eliminate her - an assassin who has already killed her once. At the same time, Ellie is falling in love with Will, even though they know their relationship should be impossible.

While balancing her dwindling social life and reaper-hunting duties, she and Will discover Bastian is searching for a dormant creature believed to be a true soul reaper. Bastian plans to use this weapon to destroy Ellie's soul forever, not to mention the devastating ramifications for human souls. Now she must face an army of Bastian's most frightening reapers, prevent the soul reaper from consuming her soul, and uncover the secrets of her past lives - including truths that may be too frightening to remember.

It seems angels are the new vampires in the young adult world. But does that mean they're going to get run to the ground in the same fashion? And turned into something they're not just for entertainment? If it does, it's not happened yet. Angelfire is a great debut novel from Courtney Allison Moulton and is the first in a trilogy, so ... even more awesome!

Ellie comes up against a reaper on the night she turns 17, thankfully Will is there to help her. He "wakes" her powers and she remembers what her job is. Ellie's sole job is to hunt and kill reapers and stop them from recruiting more soldiers for Lucifer's army. Will has been her Guardian for 500 years and always waits for her and watches over her until she turns 17.

Ellie kicks ass and it's awesome to read a YA novel that has a kick ass heroine. Her family life isn't perfect but she has Will to help her escape that life. Ah Will *sigh*, he's sexy, tattooed and willing to protect Ellie with his life ..... yeah, he's also awesome.

The book reads fairly quickly and the characters are well written. I'm really looking forward to the second book, Wings of the Wicked, which will be released in 2012.