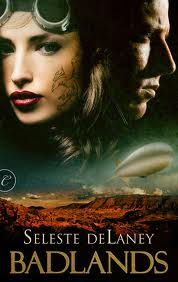 After a brutal Civil War, America is a land divided. As commander of her nation's border guards, Ever is a warrior sworn to protect her country and her queen. When an airship attacks and kills the monarch, Ever must infiltrate enemy territory to bring home the heir to the throne, and the dirigible Dark Hawk is her fastest way to the Union.

Captain Spencer Pierce just wants to pay off the debt he owes on the Dark Hawk and make a life for himself trading across the border. When the queen's assassination puts the shipping routes at risk, he finds himself Ever's reluctant ally.

As they fly into danger, Ever and Spencer must battle not only the enemy but also their growing attraction. She refuses to place her heart before duty, and he has always put the needs of his ship and crew above his own desires. Once the princess is rescued, perhaps they can find love in the Badlands - if death doesn't find them first...

Ever gets interrupted pre dinner party by a siren going off at the fortress. The prisoners have escaped and are fighting their way free. When she and her guards get there, she hears of the queen's assassination and realises she must find the princess heir to the throne. She ends up aboard the Dark Hawk and finds herself strangely attracted to the captain but she must fight her attraction and get on with her mission. But can she stop herself if he's also attracted to her?

I loved this story so much. Loved Ever and especially loved the world Seleste has built for the characters. It's just my type of place (without the war and fighting), the steampunk/clockwork style that she's going for just reminded me of Return to Oz. I like the steampunk look so I had no problem with the imagery. Hmmm, I wonder if I could have found a new Hallowe'en costume?

I may be wrong here, but knowing the author likes a certain space-cowboy Captain, I felt there was a bit of Firefly/Serenity influence going on as well. Whether there was or not, does not change my opinion of the book, it was fun to read and I didn't want it to end. In fact, I'm still disappointed that it was over so soon.