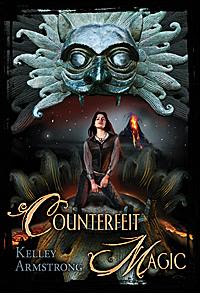 The first rule of a supernatural fight club? Don't kill your opponent.
When the fighters come with lethal spells, werewolf strength and half-demon powers, that can be a lot tougher than it sounds. It's hard to attract talent if they know they might not leave the ring alive. So when fighters at a California club start dying - it's bad for business.
Witch detectives Paige Winterbourne and Savannah Levine take the case. Going undercover in the power-heavy arena of the fight club is a welcome change of pace for Paige, relegated to the role of The Wife as her husband struggles to find his place in his family's Cabal - the corporate Mafia of the supernatural world.
As Paige is drawn deeper into new and dangerous corners of her world, she quickly discovers the greatest threat isn't the killer in her sights. It's something much, much closer to home. And this is one fight she can't afford to lose.

I will start off by saying this is not a completely unbiased review. I love Kelley so much and will never have a bad thing to say about her books. Her novellas on the other hand? They're too short, lol. I know, I know, that's the point but when you have to wait a whole year between releases the novellas are a nice wee shot to take the edge off the cravings but, like any other addiction, you end up wanting more!

Counterfeit Magic lets us know how Paige is getting on, we only had a little bit of her in Waking the Witch so it's nice to get back to her. She's approached by someone wanting the fight club investigated and she goes undercover with Savannah to find out more. It's a good break for her after dealing with the Cortez Cabal on her own, although it makes her realise help is needed in other parts of her life.

As I've already said, I can't say a bad thing about Kelley's writing. She writes such great characters and tells the stories really well, I normally read Kelley's books in one sitting 'cos she has a habit of ending chapters in miniature cliff hangers that make you keep reading even if you tell yourself you're putting it down at the end of this chapter (I do that all the time and it never pans out). Although it's even easier to read this one in one go as it's very short, took me about 2 hours to read even with a wee break for eating my dinner as well.

My only possible complaint about this is that the actual storyline seemed unfinished, although I can only hope that means Kelley will write another one. And soon.