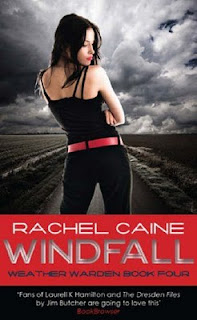 Leaving Las Vegas seemed like a great idea to Joanne Baldwin. But there is no escaping her past - and there is no time to recharge. The former Weather Warden's powers are at an all-time low just as the clouds of war are gathering - and the biggest storm since Atlantis's destruction is heading for landfall.

Joanne is exhausted. When not donning a rain mac and camping it up for the camera as a TV weather girl, she has to contend with a vengeful cop on her tail, her newly divorced sister moving in and getting caught in the middle of a supernatural civil war. Worst of all, her boyfriend in a bottle can't stop draining her powers and is fast morphing from the Djinn of her dreams to the Ifrit of her nightmares.

As the agreement between the Wardens and the Djinn starts to self-destruct, Joanne finds herself forced to choose between saving her lover, saving her Warden abilities ... and saving humanity.

Joanne is working as a weather girl in Florida and has been warned about ever using her Warden powers again. Which isn't much of a problem since David is feeding off her powers and they're running low. David is an Ifrit but he can take form after feeding, which he doesn't like doing because he knows he's hurting another Djinn by doing it. But a major storm is coming and bringing other dangers with it, Jo has a huge decision to make that will affect her whole life.

This series just keeps getting better. I love how Rachel keeps you on your toes wondering what's coming next. One thing I really love about Rachel's writing? Her chapters are nice and long, although this trifles with my "I'll read to the end of this chapter then go to bed" method of reading!

I love David so much so the "is he isn't he an Ifrit" theme in this book killed me! I just loved the scenes after he'd fed and he was back and all gorgeous and sexy as usual but then he has to go away again when his power starts to fade, urgh, so frustrating.

If you've read the first 3 you have to read on, it's the LAW!