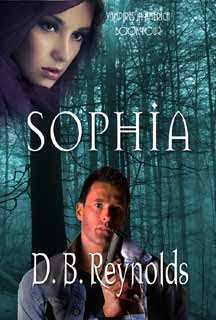 The Pacific Northwest . . . home to lush forests and constant rain, to lumberjacks and computer geeks, especially those of the vampire kind.

Sophia, beautiful and deadly, has spent the last hundred years dancing her way through the balmy nights and hot-blooded men of South America. But when her Sire sends an urgent summons, Sophia rushes home to Vancouver only to find he has disappeared, leaving nothing behind but three dead vampires and a letter with Sophia’s name on it.

Colin Murphy, a former Navy SEAL, came to the Northwest seeking a quiet place to heal the scars earned in more than a decade at war. But when someone starts killing local vampires and torturing their mates, Colin takes on the mantle of a warrior once again as he sets out to find the killers and do whatever it takes to stop them, even if that means hunting with vampires.

Following her Sire’s trail of death to a small town in northern Washington, Sophia unexpectedly discovers the heat of a South American night in Colin’s arms. But too soon Sophia and Colin find themselves in a race to uncover the killers before the next dead vampire becomes Sophia herself.

I've been waiting for this book for a long time! And happily, Reynolds didn't disappoint. Book Four in the Vampires in America series, following Raphael, Jabril and Rajmund.

I have to admit as much as I love this series ...... I'm still not a Cyn fan! She really bugged me in this book for some reason, I can't work out why exactly. I think it's the whole stubborn mule thing she has going? I mean, she chose to be with a Vampire Lord but she can't stand the protectiveness of him and how he tried to keep her from danger. I know she was all strong and independent before him but still ...... there's just a little thing always niggling at the back of my head when I read scenes with her.

I liked Sophia though (is it Soph-eye-a or Soph-ee-a? I constantly jumped between the two, neither one sitting comfortably in my mind) and Colin as well. And of course, more of the delectable Duncan =D

OK, so this next part should hopefully be blank (I've not done this before so this'll be my first try) since it contains spoilers. If you've read the book and want to know what it says them you should only have to highlight it to read it (I will be testing this theory before the actual post goes live though, lol).

I was actually quite sad that Cyn didn't die ...... let me explain myself before you get all angry.  Yes, I don't like her and know that her death would mean Raphael's death but I also thought that would be the perfect tie in to Duncan's book (which is next) since all the books up to now have been about Vampire Lords (and Lady).


So yeah, that's my thoughts.  If you've read the first 3 then you're undoubtedly going to read this and if you haven't read the first 3?  What the hell are you doing still reading this?  Go buy them all now!!!