Falling for his Best Friend by Katee Robert 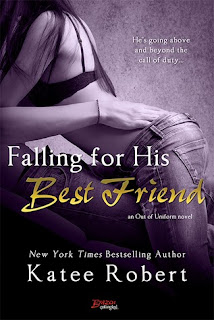 Avery Yeung's biological clock just went off early. Thanks to her family's medical history, she's running out of time to get knocked up. And the only guy within donating distance? Her overprotective — and irritatingly hot — best friend. So clearly she needs an anonymous donor...

Anonymous donor? Over Sheriff Drew Flannery's dead body. While daddyhood will never be in the cards for a man with his past, Drew won't let Avery shop for a "popsicle pop". He'll do what's right for his best friend by doing his best friend. But only if they do it properly.

But there's nothing "proper" about it. Between the bed, the kitchen counter, and against his squad car, Avery and Drew are having the hottest sex ever. They can't get enough of it — or each other. And without knowing it, they've crossed the one line that could ruin their friendship forever...

Finally we get to Avery and Drew's story, I know there are plenty of Robert's fans waiting for this story as much as I was since we met them in In Bed With Mr Wrong. And apparently being friends for your whole life can make for some seriously sexy moments!

Robert gives us the story we've all been waiting on and she doesn't disappoint. Of course there's the weird feeling after they have sex and they're both worried about ruining their friendship because neither of them want to admit their real feelings in case the other one doesn't share them. And this is point in these books where I find myself shouting "Just talk to one another!" in frustration.

Seriously, most books have conflict purely because the characters don't talk about mutual feelings and then misinterpret something that someone says or does. I get that it's hard to create conflict without this trope but it's too predictable.

Even with that particular trope being used, this is my favourite of the Out of Uniform series so far.

Labels: book review, falling for his best friend, katee robert, out of uniform