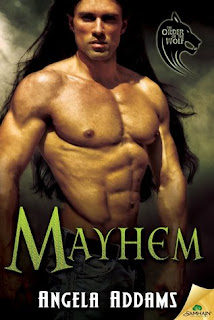 He will rock her world... once he shows her how he really howls.

By night, Mayhem howls out monster rock hits to roaring crowds, and lives the rock 'n' roll dream. But lately he wants more than empty sex marathons with lusting fangirls. When he spies a beautiful redhead at his latest album launch party, his wolf howls only for her.

He can taste her sweetness and innocence hovering just beyond his grasp, but it'll be a delicate task showing her the side of his life no one ever sees. When the sun rises, and his wolf form takes over.

Fledgling rock magazine editor Hannah knows the minute she lays eyes on Mayhem that she won't fit into his world. But that doesn't mean she can't fantasize that she's the only woman wrapped around his smoking-hot body.

One kiss — one perfect kiss — and Mayhem is ready to seal the deal of and for a lifetime. But before he can properly introduce Hannah to both halves of himself, she is gone without a trace. And the rapidly cooling trail smells distinctly of Hunter...

I have to start by saying if I was to properly judge a book by its cover, I wouldn't buy this. I just ..... I can't see the selling point in that cover, do readers actually like that sort of stuff? Am I abnormal in my dislike of this type of cover? Anyway, the cover does not a book make so on with what I think of the actual book.

This is long awaited for any fans of Order of the Wolf that may have a crush on Mayhem (personally, I'm a Dyami fan), as the alpha and lead in the band he was due a big story. Sadly, the actual storyline doesn't have the "Wow" factor I might have expected for Mayhem. The heroine is semi-likeable but I wasn't hugely impressed by her.

I like this series but the stories seem to be on and off for me. I find, I'll like one but maybe not the next or I'll be "meh" about one and excited about the next.