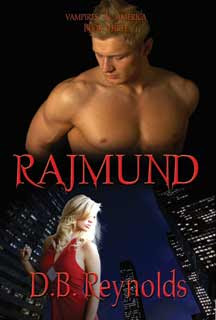 New York City vampire Rajmund Gregor is the undisputed master of The Big Apple. He bows to no one but his Sire, the Vampire Lord Krystof, who has ruled the Northeast for hundreds of years. But when Krystof summons Rajmund to his headquarters in Buffalo, Raj finds his master slowly descending into madness and his territory crumbling around him. Raj is the only one of Krystof's children strong enough to seize power, but he’ll have to save his master before he can destroy him. Several women have gone missing and the local police are convinced a vampire is behind it. Is Krystof so lost to reality that he’s capturing and murdering human women? Is a rogue vampire moving into Krystof’s territory for the kill? Or is it something far more insidious, something that could threaten the existence of vampires everywhere?

Sarah Stratton is living a lie. Her past holds a secret she shares with no one—not even her good friend Cynthia Leighton, the West Coast vampire lord’s mate. It's a secret that could destroy her carefully constructed life as a professor at a Buffalo university. It’s also a secret that could save the lives of the missing women. To save them, however, she must enter Buffalo’s vampire community and put herself into the care of Rajmund Gregor. But can she trust Raj, the dangerously seductive vampire who wants to lay claim to far more than her secrets?

The 3rd book in the Vampires in America series.
Cyn's friend Sarah is a great character, I definitely preferred her to Cyn. I also preferred Raj to Raphael, I'm waiting until I read Duncan's book before I decide on my favourite vampire.
Good story but why do the lead characters never talk to one another? There always seems to be tension between them (Raj + Sarah and Raphael + Cyn) because they think the other hates them. I'm hoping this won't be a recurring theme in the rest of the series.