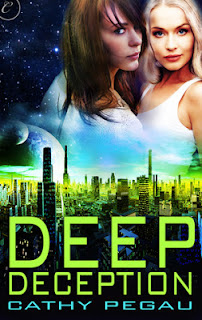 Colonial Mining Authority agent Natalia Hallowell doesn't always play by the rules, but she wouldn't compromise a case either. Put on administrative leave under a cloud of accusation, with no support from her boss, Natalia seeks a little anonymous companionship at her favourite bar. But she's surprised when the woman who catches her fancy starts buying her drinks.

Desperate, Genevieve "Gennie" Caine had no choice but to seduce, drug and tie Natalia to the bed to get her attention. With the Reyes Corporation after something she has, Gennie needs Natalia to open an investigation and distract them long enough for her to get off Nevarro.

Natalia doesn't trust Gennie — despite the growing attraction between them — but the corporation's suspiciously high profits convince her that they must be hiding something. But she has no idea just how deep the deceptions run...

Natalia is framed, accused of sleeping with the enemy - until she can prove different, she's on leave. At the bar Gennie catches her eye, unfortunately Gennie has plans for Natalia - she needs her help. They go undercover to a mining colony to try and find the evidence that Gennie needs to get the Reyes family off her back but the close living arrangements don't help their attraction to one another.

This is the follow up to Caught in Amber (although I don't think the series actually has a name? Not that I can find anyway) where we first met Natalia & Gennie, the former helping Spencer and Sasha (who make an appearance in this book) while the latter first hindered then helped them.

I liked both leads in this, they both have their problems but don't let it get in their way. In fact, Gennie is risking everything to get Natalia's help - she's willing to risk her life to help her kids and get out from under the Reyes radar. Natalia is willing to help Gennie despite their initial meeting being a farce. I enjoyed the storyline, well paced and well written with a lot of action. And Natalia and Gennie's relationship is sweet, they're both scared and they both have their reasons for not pursuing it but, of course, they can't stop it from happening.

Recommended, and I discovered there was a book before Caught in Amber called Rulebreaker that I have just downloaded to my Kindle.