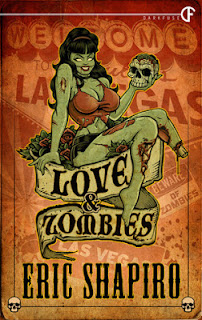 The zombie apocalypse has already ended. The government nipped the problem in the bud before it got out of hand. But now Henry, an aspiring filmmaker in Los Angeles, is getting a request from his old friend Sam Kranson. Sam Kranson says they need to go run an errand in Las Vegas. There's a hefty payday for the job. And it involves capturing a real live zombie.

But that can't be true, can it? Are there zombies out there in the Nevada desert? Or has Sam Kranson finally lost his mind? And more importantly: Will Henry's loving girlfriend Teresa strangle him if he goes on this adventure with Sam?

Part horror, part comedy, all madness and suspense, Love & Zombies is a lunatic burn through three days in the life of Henry—days in which he battles to stay alive, and get back to his love without becoming (un)dead.

This book was very quick to read and I found it to be extremely entertaining. Dark Fuse are proving themselves to be a publisher that aren't scared of the weird and unusual and what few books I've read from them, have been great.

If you don't mind books that don't take themselves seriously then I recommend this one. It's brill.


I can't find this book on any of my regular sites and it doesn't seem to be up for pre-order on the Dark Fuse site but keep and eye on it on release date if you want to get it.
Posted by Julie-Anne at 16:27