The Hot Scot by Kate Eden 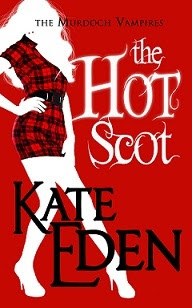 Logan Murdoch hates complications. All he wants to do is work in his lab and create products to help vampires blend into mortal society. But when his mother begs him to get her painting back from the museum, he discovers a very attractive complication in the form of curator Sydney Worth. She buys his lie that he's the descendant of the man in the three-hundred-year-old painting, but refuses to give it to him. What's worse? She's immune to his mind control.

Sydney couldn't believe her eyes when the spitting image of the Hot Scot walked into the museum. But her attraction to Logan Murdoch suffers a huge blow when he demands the painting. Losing the piece could threaten her job and she senses Logan is hiding something from her. But this vampire who hates complications and the ambitious curator with trust issues are about to learn the fine art of love.

Sydney has the hots for a man in a painting dubbed The Hot Scot, imagine her surprise (and delight) when he walks into her museum, then imagine her anger when he wants to take the painting away. She agrees to work with him to confirm his ownership of the painting, little knowing that she's actually putting herself in the middle of vampire politics. They try to deny their feelings for one another for their own reason - Sydney has bad relationship history and Logan is a vampire with bad relationship history. Is Sydney willing to give up her life as she knows it for a chance with Logan?

First things first, as much as liked this book, the story and the characters - the editing mistakes were numerous throughout and I find that drags me away from the story. There's nothing worse than being in a story and having a spelling mistake or double word or wrong word wrench you out mid sentence.

That being said, I know it has nothing to do with the book and doesn't affect my GR rating. I just feel it has to be mentioned as I know a lot of other readers are like me and the little errors niggle at you.

Logan's mother is, by far, my favourite character - I definitely like her more than Sydney and Logan combined, that's saying something when I can also say that I loved them both. Sydney does let her boss walk all over her (which I hate) but she's still a good leading lady.

The story is well written and has just the right amount of action in it to keep interesting but not take away from the real reason for this books - the romance and potential smexy times between Sydney and Logan.

Thankfully, Eden doesn't write her Scottish characters as stereotypical Scots (there's reason I don't touch all those Highlander romance/paranormal books), I was willing to give this a try since Jaye Wells is one of my favourite authors. I'm glad I didn't let my prejudice get in the way.

Recommended if you're a Jaye Wells fan, also if you like your books to be light, funny and quick to read.