Gaming for Keeps by Seleste deLaney 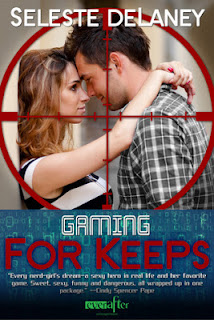 Pen Holloway's done with men — in real life. Guys in game are so much less drama. But when her partner from Heroes of Fallen Gods invites her to the convention of the year, she panics. What if he's another jerk? What if he's not?
Cal Burrows is living his dream of being a spy. One of TRAIT's misfit spies, but still a spy. It's the perfect job ... until an arms dealer with a taste for blood invades his not-so-secret geek haven. All Cal wanted from ConDamned was to meet his on-line girl. Now, with the threat of mass murder looming, he's forced to choose between keeping his mission a secret and protecting the girl of his dreams.
Despite their attraction, Pen can't help but suspect Cal's hiding something. She also can't shake the feeling he's not as much of a stranger as he seems.

Pen gets an invite to ConDamned from an online gaming friends/flirting partner and agrees to go and meet up with him. Cal plans on going to ConDamned but gets roped into working when an arms dealer is discovered to be there. They bump into one another and sparks fly, they fuck, there's a misunderstanding and then there's an arms dealer trying to ruin a screening.

Yet another great book by my very awesome friend, Seleste. I swear the woman can't write a bad sex scene ..... and I suppose the other parts are OK as well!

I liked Pen as a character, she has problems plus she'd rather be online than deal with real life people (much like me - my friends all live in this little box in front of me). I wasn't enamoured with Cal straight away but I got to like him as the story went on - not sure what it was but he just didn't gel with me at the beginning.

I loved all the geeky references - made all the better by the fact that I know the author actually loves all the stuff she was writing. With some authors I sometimes feel like they're trying to have a character be "cool" by referencing things but I know for a fact that this isn't the case this time.

Of course I'm going to recommend this - I can't say anything bad about my best girl so go out and buy it (when it comes out), pre-order links are up at Amazon, Barnes and Noble and iTunes but not Amazon UK at the time of writing this. I think you can also buy it direct from the publisher, Entangled Publishing.
Posted by Julie-Anne at 00:49