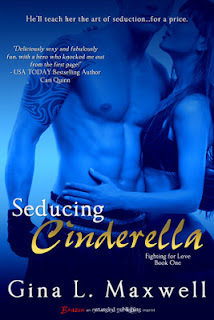 Mixed martial arts fighter Reid Andrews's chance to reclaim his title as light heavyweight champ is shattered when he's injured only months before the rematch. To make sure he's healed in time, his trainer sends him to recuperate under a professional's care — Reid's best friend's little sister, all grown up.

Disorganised and bookish Lucie Miller needs some professional help of her own. She'd do anything to catch the eye of a doctor she's crushed on for years, so when Reid offers seduction lessons in exchange for 24/7 conditioning for the biggest fight of his career, Lucie jumps at the chance.

Soon Reid finds himself in the fight of his life ... winning Lucie's heart before she gives it to someone else.

Reid gets sent to a new Physio, turns out it's his best friend's little sister. He tries to get her to agree to be his personal physio for the next 2 months but when she says no, he says he'll give her lessons in seduction so she can catch the attention of the doctor she likes. You can guess where it goes from there.

I've read a few books lately that have the whole "best friend's sister" thing going on, it seems to be a popular storyline at the moment. I guess it'd because it's seen as a no-go area with guys? Not being a guy, I'm unsure and it's a concept I don't understand to be honest.

I find it hard to believe that an MMA fighter would give a woman a makeover, but the author at least tries to explain it away with Reid's artistic side. And I completely believe that he can seduce the pants of any woman but I find the concept of seduction training a bit weird. But, while some parts of the story are a bit hard to believe, the characters and the connection between them as they build a relationship sort of makes up for it. 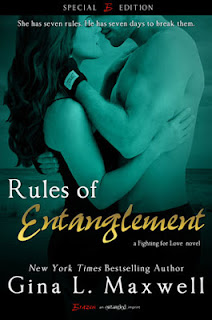 District Attorney Vanessa McGregor firmly believes that structure and order are the stuff that dreams are made of. Happiness can be planned - and it starts with seven rules she's laid out for her future. But as she's organising her best friend's wedding in Hawaii, all of Vanessa's best-laid plans are about to meet their match in a wickedly hot MMA fighter...

Jackson "Jax" Maris is focused on surfing, training and fighting. That is, until he opens up his big mouth, and finds himself having to pretend he's engaged to his little sister's best friend, Vanessa. When they're forced to share a romantic bungalow, however, their little charade suddenly takes a turn for the seriously sexy. And while Jax is definitely not part of Vanessa's long-term plan, he has seven days - and seven naughty nights - to turn her seven-rule plan upside down.

Vanessa goes to Hawaii to help with last minute wedding things 'cos Lucie's too ill to do it herself, she's working with Jackson for the week. Immediately Jackson riles her and there's tension ... which quickly turns to sexual tension. He tells a little lie that gets bigger the longer he leaves it until it threatens to rip everything apart.

Jackson has that whole Alpha male dominance things going on which I can't help but love, so of course I like him more than Reid. I liked the actual story more 'cos it wasn't about getting someone ready to love someone else. They both knew from the start what they were dong, they just didn't count on it turning serious. And of course, because I like the story more it means I like Vanessa more than Lucie - I know, weird logic but it's how my brain works.

The heat between Vanessa and Jackson is AMAZING! It's the type of sex every woman wants, or at least I do - fast, hard and Alpha male dominated.

and Rules of Entanglement