Lament for the Living by David Nicol 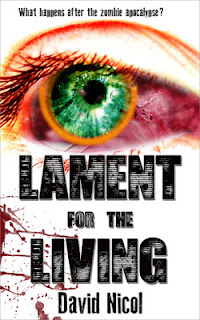 What happens after the zombie apocalypse?

Set three years after the Outbreak that destroyed their lives, 'Lament for the Living' follows the inhabitants of the Sanctuary as their safe and secluded existence is threatened by a group of nomadic survivors.

When the Rangers of the Sanctuary head out to investigate a mysterious fire, they find the true nature of humanity and the societies that evolve after the zombie apocalypse.

Ultimately everyone has to choose: Survivor, or Nomad?

Sacks is one of the Sanctuary survivors, she patrols the area surrounding the Sanctuary every day but wants to be a Ranger (who travel further). When she finally gets her chance to go out with the Rangers, another group threatens the very existence of the Survivors and the peace they've created.

Nicol has created a world full of uncertainty and fear. He makes us feel for the zombies with the first chapter following a man that eventually gets Infected, this same man is also how we're introduced to Sacks and the Sanctuary. Sacks was saved when the outbreak first began and has only really known the Sanctuary as home since so seeing the Sanctuary being attacked through her (and other survivors' eyes) is particularly heart-string-tugging (if you're so inclined). It's like seeing your own home being terrorised.

Nicol's zombies are more old school than some of the ones in literature lately. They're slow and shambling, moaning and groaning and completely driven towards to people for feeding - they don't have thoughts and feelings like a lot of the modern ones do, and I really enjoyed reading them this way. Also, and I told Nicol this already as I was beta reading it, the character of Alex is so maniacally unhinged that I can't help but liken him to Begby from Trainspotting.

If you like old-school zombies and indie authors, this is recommended.


Amazon UK(Kindle only): Lament for the Living

Paperback copy from Createspace: Lament for the Living
Posted by Julie-Anne at 20:11